Due to the current restrictions caused by the Corona virus pandemic we would like to inform you about the postponement of the measure No. 21021949 which is included in the network development plan 2016-2026 (No. 307-01) concerning the compressor station in Mittelbrunn, initially planned to take place from 1 April – 31 July 2020.

Open Grid Europe GmbH (OGE) and Fluxys TENP GmbH (Fluxys TENP) would hereby like to provide all interested parties with the following information regarding the capacity offers of both parties:

As already communicated on 27 March 2020, the final phase of the construction works of the NDP maintenance measure No. 307-01 (“GDRM-Anlage Mittelbrunn”) which is included in the Network Development Plan Gas 2016-2026 (NDP 2016) had to be postponed due to the COVID-19-pandemic.

Based on the planned maintenance measure No. 21022876 (published on 8 July 2020), the physical gas transport between the TENP and MEGAL pipeline systems will be restricted from 1 April 2021, 06:00 hours until 1 July 2021, 06:00 hours. Therefore, during this period bFZK capacities at Entry Bocholtz / VIP TTF-NCG-H and a part of the FZK capacities at Exit Wallbach / VIP Germany-CH will be impacted.

A detailed overview on the impacts of the above-mentioned maintenance measures on the entry and exit points along the TENP pipeline can be found in the publications of the maintenance works 2020/2021 under this link.

OGE and Fluxys TENP aim to minimize the impact of the maintenance measures on the capacity offer as much as possible and apologize for any inconveniences caused. For finding suitable solutions and for any further questions related to these maintenance measures please feel free to contact us.

During the now affected idle time, the separation of the connection of the MEGAL and TENP pipeline and the construction of a new linkage between the two pipeline systems should have taken place.

In the light of the current dynamic of the Corona virus pandemic and the potential risk of not being able to finalize the constructions works in due time for the next foreseeable future after the physical delinking once has been conducted, OGE and Fluxys TENP management have decided after a very careful assessment and intense consulting to postpone the construction work to a less risky period of time in 2021. An unplanned and not controllable delay of the measure would most likely impose a negative effect on the security of supply of parts of Southern Germany, Switzerland and Italy.

OGE and Fluxys TENP sincerely apologize for the postponement and the involved ramifications. At the same time, we ask for your understanding that the planned measures cannot being initiated in the light of the aforementioned risks and the potential impact on the security of supply.

As soon as the planning of a new time frame for the conduct of the measure will be completed, we will immediately inform all market participants via the usual channels of communication.

November 2019 – Construction of new sections on TENP I pipeline system

In the light of an unsettled evaluation of the integrity of the TENP I pipeline on the section Boxberg – Wallbach OGE and Fluxys TENP proposed measures in the “German Network Development Plan for Gas 2018-2028” (“NDP 2018”) reflecting future transportation needs in the South of Germany and to Italy/Switzerland. In order to ensure the security of supply needs resulting from the NDP 2018, OGE and Fluxys TENP in their function as shareholders of TENP KG, had decided to start building a new pipeline section between Mittelbrunn-Schwanheim and Hügelheim-Tannenkirch, as well as the necessary connections to the TENP II pipeline. The measures were included in the NDP 2018.

As a result of this investment, the capacity needs for security of supply for the Baden-Württemberg area identified in previous NDP-processes, being an additional demand of 5.2 GWh/h, will be secured. Additionally, those investments will secure freely allocable capacity of 13.3 GWh/h at the IP/VIP Exit Point Wallbach which at that time had been deemed as minimum requirement for security of supply in Switzerland and Italy.

Based on the results of the investigation regarding the integrity of TENP I pipeline on the section Boxberg – Wallbach, OGE and Fluxys TENP can now confirm not being able to take larger parts of TENP I back into service. Therefore, it can be confirmed that the capacity restriction of 13.3 GWh/h at IP/VIP Exit Point Wallbach as announced by OGE and Fluxys TENP on 6th March 2019 will last until measures from NDP 2018 will be in operation (presumably in 2024) .

Meanwhile, OGE, Fluxys TENP, SNAM Rete Gas, Swissgas, FluxSwiss and Transitgas have been asked by the Italian, Swiss and German authorities to analyse further if such capacity at IP/VIP Exit Point Wallbach of 13.3 GWh/h might be sufficient. Such analysis revealed a need for a capacity of 16.2 GWh/h at IP/VIP Exit Point Wallbach to accommodate the security of supply needs of Italy and Switzerland. The above mentioned TSOs informed the Italian, Swiss and German authorities accordingly.

OGE and Fluxys TENP incorporated the revised capacity of 16.2 GWh/h at IP/VIP Exit Point Wallbach in the Scenario Framework for the German Network Development Plan for Gas 2020-2030 (“NDP 2020”) which currently is under examination by the German regulator Bundesnetzagentur. Given that the Scenario Framework will be approved by Bundesnetzagentur, respective measures in order to achieve 16.2 GWh/h at IP/VIP Exit Point Wallbach will be developed in the NDP 2020.

OGE and Fluxys TENP will continue to duly and timely inform the market about any new development regarding the above. 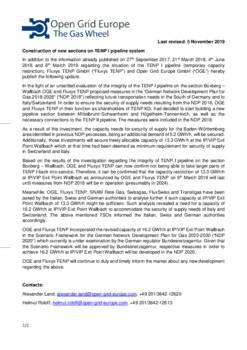 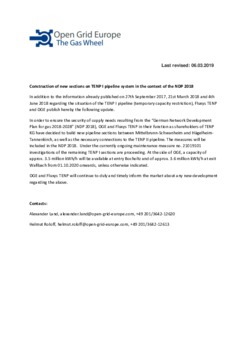 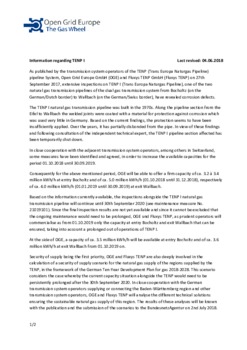 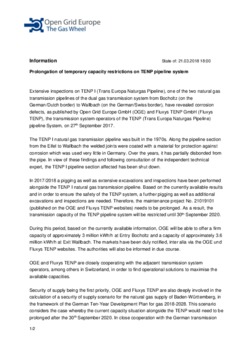 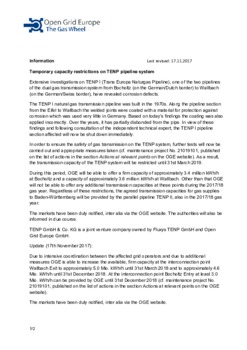 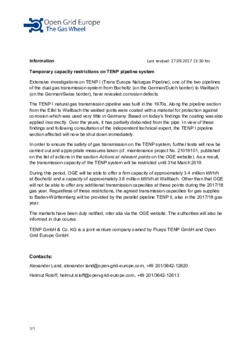