In view of current plans to increase the flexibility of gas transmission from north to south and south to north, TENP has decided to build a gas de-odorisation plant. It will developed as a joint project of Open Grid Europe GmbH and Fluxys TENP GmbH and subsequently operated by Open Grid Europe GmbH.

The project involves the construction of a plant to remove the odorous substance (odorant) tetrahydrothiophene (THT). THT is an odorant that is widely used in the French high-pressure gas transmission system, but is only added to the German pipeline network when the gas is transferred to the downstream distribution grids. Due to the technical requirements associated with gas transportation, it is not used in the German high-pressure transmission system.

The odorant is removed using fixed bed adsorbers, as is common practice in gas treatment plants. The natural gas is piped through the de-odorisation plant, which essentially consists of four adsorber towers with the necessary ancillary equipment.

Given the European character of the TENP pipelines, which connect several countries, and the special position in Germany, the TENP de-odorisation plant has the status of what is known as a Project of Common Interest (PCI) and is therefore funded by the European Union under the supervision of INEA (Innovative and Network Executive Agency). EU Regulation 347/2013 on guidelines for trans-European energy infrastructure (TEN-E Regulation) thus applies. 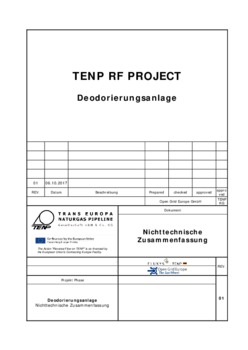 Non-technical summary (only in German)