We strengthen market integration. Information on VIP formation and the dual system.

There is new information on the establishment of virtual interconnection points (VIPs) in accordance with Art. 19 (9) of Regulation (EU) 2017/459 (NC CAM). The Federal Network Agency (BNetzA) has informed the German transmission system operators (TSOs) that the dual system will continue to be implemented in Germany. This decision is based on the EU Commission’s finding that the Network Code Capacity Allocation (NC CAM) cannot be adjusted before 2020.

Despite the use of the term "available capacities", the European Commission implicitly provides for already contracted capacities to be included in virtual interconnection points. The Federal Network Agency (BNetzA) does not share this interpretation. Consequently, OGE and the other German TSOs are continuing to work together on the implementation of the dual system.

The dual system as agreed with the Federal Network Agency

We have agreed implementation details with the Federal Network Agency, which are listed below. Should the introduction of a virtual checkpoint be delayed, they will only apply from the time of actual introduction. It should be noted that a VIP can only be implemented if the introduction and settlement arrangements have been agreed with the partners on the other side of the border. As long as a checkpoint has not been introduced into a VIP, the current rules for this checkpoint continue to apply until further notice.

Details of the dual system

The main details of the implementation process for the "dual system" agreed with the BNetzA are listed below. The arrangements apply in each case at the earliest from, or with reference to, 1 November 2018. If the introduction of a VIP is delayed, the arrangements only apply from, or with reference to, the time of the respective introduction of the VIP. It must also be taken into account that a VIP can only be implemented if the introduction and settlement arrangements of the VIP have been agreed with the partners on the other side of the border. If or as long as an IP is not included in a VIP, the current arrangements for this IP continue to apply generally unchanged until further notice.

Contractual verification of nominations at each IP and at the VIP

Aggregated nominations are transmitted to the adjacent TSOs for matching

Art. 19 (9) Regulation (EU) 2017/459 (NC CAM) provides for the implementation of virtual interconnection points (VIP). Due to the merger of the Netconnect Germany (NCG) and GASPOOL market areas into the new Trading Hub Europe (THE) market area on October 1st, 2021, there will be an obligation at some borders to merge further interconnection points (IP) and existing VIPs to new THE-VIPs. The transmission system operators (TSOs) on the borders with Denmark, the Netherlands (H-Gas & L-Gas), Belgium and the Czech Republic are affected by a merger to form THE-VIPs

Considering the high implementation effort caused by the market area merger on October 1st, 2021, it is not possible to implement all THE-VIPs at the same time. The progressive introduction of the VIPs to be formed is also based on their respective complexity.

A consolidation of the VIPs on the border to the Czech Republic is currently not planned. The current VIPs (VIP Brandov-GASPOOL and VIP Waidhaus NCG) will therefore continue to exist beyond the market area merger and will be renamed as VIP Brandov and VIP Waidhaus as of October 1st, 2021.

The essential details of the implementation of the “dual model” agreed with the Federal Network Agency still apply, as published on the website. The handling of existing contracts with IPs will not change with the newly formed THE-VIPs.

In contrast to already concluded IP contracts, existing VIP contracts concluded at the current NCG and GASPOOL VIPs that have to be merged to the new THE-VIPs will be completely transferred to the new THE VIPs as specified in the respective terms and conditions of the TSOs. At present, the concerned TSOs are still working on the design of the transfer of contracts from the NCG and GASPOOL VIPs to the new THE-VIPs and will inform the affected shippers sufficiently in advance.

The TSOs responsible for each VIP inform the market individually for each VIP about the current implementation status.

Status of implementation at the relevant VIPs

As described in the market information of May 2018, it is not possible establishing a VIP between NCG and the Market area East including the points Oberkappel and Überackern. Following a written request by the Federal Network Agency (BNetzA), the TSOs GRTgaz Deutschland and Open Grid Europe have decided to establish a VIP only at Oberkappel on the German side.

The TSOs will thus establish the VIP NCG Oberkappel on the German side of said interconnection point on 1 March 2019. This implementation date has been communicated to Gas Connect Austria and the BNetzA.

Further details regarding the implementation of this VIP (e.g. EIC code) are available under the download section. The TSOs underline that the changes due to the VIP establishment only affect the German side of the cross-border interconnection point.

Due to the uncertainties regarding the VIP establishment as well as the risks involved, the TSOs were for a long time unable to initiate the adaptations to the core processes and IT systems required for VIP implementation. The implementation of VIPs has implications for the whole complex IT landscape of the TSOs. In particular time-critical, highly-available systems and processes like nomination and grid steering systems are affected. Due to the criticality of these systems and processes a comprehensive quality assurance is imperative.

Therefore, the TSOs will establish the VIP France-Germany and the VIP Waidhaus NCG by 1 March 2019. This implementation date has been coordinated with the adjacent TSOs, and the Federal Network Agency (Bundesnetzagentur) has been informed accordingly.

Start of capacity marketing at the VIP:

The marketing of capacities at the VIP began in the day-ahead auction on 28 February 2019 for the gas day 1 March 2019.

Fees at the VIP:

With regard to VIP charges, the TSOs refer to the price sheets of the VIP TSOs NET4GAS, GRTgaz, GRTgaz Deutschland and OGE.

Start of capacity marketing at the VIP: The marketing of capacities at the VIP began with the day-ahead auction on 31 October 2018 for the gas day 1 November 2018.

VIP tariffs: With regard to VIP tariffs, the TSOs refer to the price sheets of the VIP TSOs NOWEGA and OGE.

The implementation of the VIPs had an impact on the entire complex IT landscape of the VIP partners. Especially time-critical, highly available systems and processes such as nomination and network control systems were affected. Due to the criticality of these systems and processes and the mutual dependencies between the IT systems of the TSOs, extensive quality assurance was imperative. This required more time than originally expected.

The TSOs were therefore able to set up the VIP Belgium-NCG and the VIP Germany-CH on 1 July 2019 and from then on to market capacity only at the VIP. In order to allow our customers to book VIP capacities at an early stage, capacities were only marketed at the VIP in the following auctions:

This procedure has been coordinated with the adjacent TSOs and the regulator (BNetzA) has been informed accordingly.

Further details regarding the implementation of these VIPs (e.g. EIC codes) were also communicated to the market by the TSOs with sufficient advance notice. The participating TSOs would like to point out once again that no major changes in the process are to be expected for shippers. This applies in particular to shippers who are already active at the relevant IPs. Since VIP management at the Belgium-NCG and the Germany-CH VIPs will be carried out by Open Grid and Europe Fluxys TENP (as VIP TSOs), respectively, and the current processes remain largely unchanged, the shippers’ obligation to cooperate prior to network use will be limited to registering with the VIP TSO via the capacity platform PRISMA, if they have not already registered with this TSO, and to completing a communication test. This registration is already possible now. The respective VIP TSO will allow sufficient time for registration and interface setup.

We are glad to inform you that the above-mentioned VIPs will be implemented on April 1st, 2020, 6 a.m. The first marketing of capacities for these VIPs will start with the monthly auction for April 2020 on March 16th, 2020.
With the implementation of VIPs between the Netherlands and NCG, no capacity will be offered at the above-mentioned IPs as of April 1st, 2020. The last capacity auctions for these IPs will be the day-ahead auction and the within-day auctions on March 30th/31st, 2020 for March 31st, 2020. Contracts already concluded at the above-mentioned IPs will remain valid. For transportation periods on/after April 1st, 2020, 6 a.m., all capacity contracts will have to be concluded at the corresponding VIPs.
Therefore, we kindly ask you to ensure that the following codes are used for your nomina-tions: 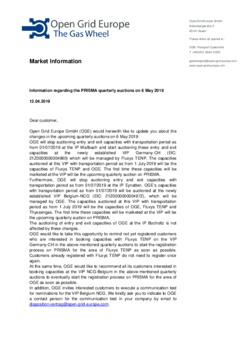 Information regarding the PRISMA quarterly auctions 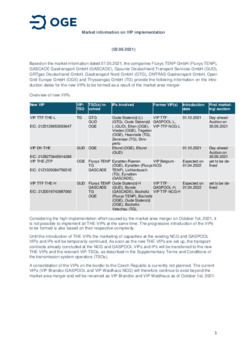 Market information on THE VIP implementation 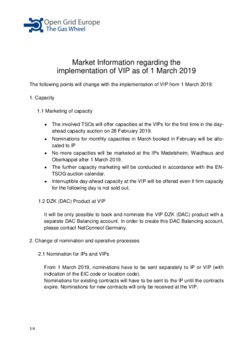 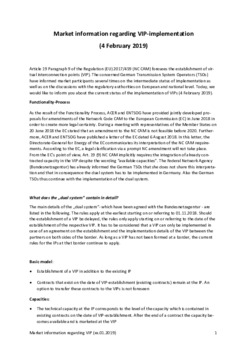 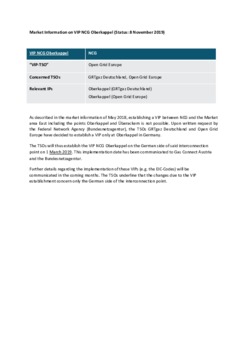 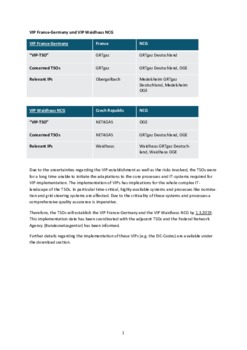 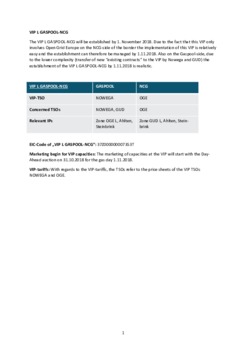 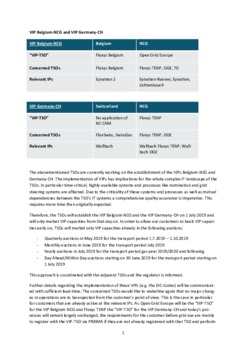 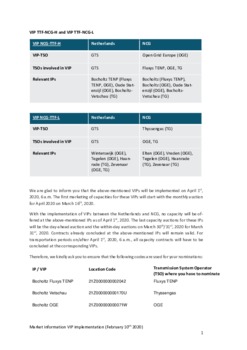 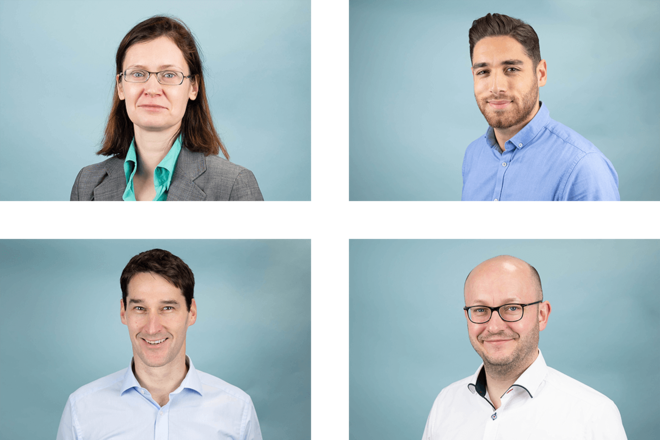