The European Hydrogen Backbone (EHB) initiative will today present a study on future demand, supply and transportation of hydrogen within Europe. This supplements the recently published EHB maps, which show a hydrogen pipeline network of almost 40,000 km to take shape by 2040, which will link up 19 EU member states as well as Great Britain and Switzerland.

Goal of a climate-neutral continent requires large amounts of hydrogen

By 2050, hydrogen demand in the EU and the UK could be around 2,300 TWh (of which 2,000 TWh would be within the EU). This corresponds to around 45% of natural gas consumption in this region in 2019. In the future, hydrogen will be hugely important for decarbonising industry, particularly the chemicals industry (ammonia and high-value chemicals), the iron and steel industry, and fuel production. Hydrogen is also expected to play a major role in the provision of dispatchable power, as a fuel for heavy-duty transport, and in the heating market in some countries.

Europe can supply its own green and blue hydrogen; imports likely

The total expected hydrogen demand can be covered by green hydrogen produced from renewable electricity in the EU and the UK. Production of such volumes of green hydrogen, however, requires social acceptance of an accelerated expansion of installed renewables capacity. Furthermore, questions of financing, regulation and quality standards still need to be answered. It is expected that production of green hydrogen will become ever more economical, which would permit rapid scaling. In addition, large quantities of relatively inexpensive blue hydrogen could be produced in Europe to enable a fast reduction of carbon emissions and thus accelerate the energy transition. The study also shows that hydrogen imports via pipelines can represent an attractive addition to domestic supply.

Existing, repurposed gas infrastructure will play a crucial role in connecting sites of H2 production and consumption and thus in the balance of supply and demand. With costs of 0.11-0.21 €/kg per 1,000 km, hydrogen pipelines for transportation of large quantities of hydrogen over long distances are the most cost-effective option for all logical transport routes within Europe and neighbouring regions, even ahead of shipping. The study also shows that for the transportation of large amounts of energy where the desired end product is hydrogen, even without consideration of flexibility costs such as energy storage, pipelines are more cost-effective than power lines delivering the same amount of energy.

“The new study shows that hydrogen will play a central role in various energy demand sectors. And the Backbone will act at an enabler here, linking supply and demand in Europe and at the same time facilitating low-cost imports”, said Daniel Muthmann, Coordinator of the EHB initiative and Head of the Corporate Development, Strategy, Policy and Communication division at OGE. 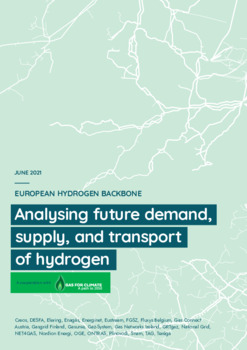