The development of a hydrogen infrastructure is a crucial building block for the decarbonisation of Germany and the diversification of its energy supply. To accelerate this important process, OGE and RWE have developed the national infrastructure project "H₂ercules", which will supply consumers in the south and west of Germany with green hydrogen from domestic production and via import routes.

Therefore, up to 1 GW of new electrolysis capacity and 1,500 km of pipeline are planned by RWE. For the most part, pipeline conversions of the existing natural gas network are planned, supplemented by new constructions. The conversion of natural gas pipelines is not only the more cost-efficient solution, but also allows for a faster timeline. It is currently planned to implement the project in two steps by 2028 and 2030 in order to connect industries to the hydrogen supply as early as possible. This cross-value-added cooperation should overcome the chicken-and-egg problem in XXL format and pave the way for other projects as well.

While it will be OGE's task to convert the required natural gas pipelines to hydrogen and build new pipelines, RWE will build up the electrolysis capacity and import additional green hydrogen. In addition, gas-fired power plants with at least 2 GW will be converted to hydrogen and gas storage facilities at the Dutch border will be connected to the hydrogen supply system to create further backup capacity.

H2ercules opens up new opportunities to connect Germany to essential import routes - initially via pipelines from Belgium and the Netherlands, later via Norway and from Southern and Eastern Europe: prospectively also via import terminals for green molecules in Northern Germany. In this way, the project contributes to the emergence of a European hydrogen market.

First companies have already signaled their interest in this project, and it is expected that in the future not only large consumers will benefit, but also smaller companies, thus leading the overall economy into a decarbonised future.

The implementation of the project requires suitable framework conditions, which RWE and OGE intend to discuss with the politicians shortly.

For more information, go to www.h2ercules.com. 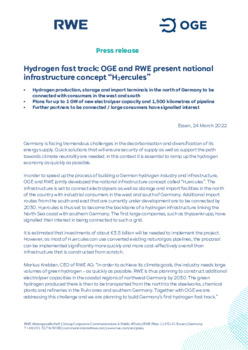 In order to speed up the process of building a German hydrogen industry and infrastructure, OGE and RWE jointly developed the national infrastructure concept called “H₂ercules”. The infrastructure is… set to connect electrolysers as well as storage and import facilities in the north of the country with industrial consumers in the west and south of Germany.