In the wake of the Russian invasion of Ukraine, the onus is on European countries to achieve greater energy independence. This has led to a greater push to accelerate and scale up the adoption of decarbonised energy sources as highlighted in the REPowerEU statement, a plan to phase out Europe’s dependence on fossil fuels from Russia well before 2030 and to increase the resilience of the EU-wide energy system. Amongst other measures, REPowerEU introduces an update of its vision for a dedicated hydrogen transport ambition to reach an additional 15 million tonnes (Mt) of renewable hydrogen on top of the 5.6 Mt foreseen under Fit for 55, going beyond the targets of the EU’s hydrogen strategy.[1] Achieving these targets will require a rapid acceleration of the development of an integrated gas and hydrogen infrastructure across Europe. In light of these events, the EHB has accelerated its programme from 2035 to 2030 with the aim to meet the REPowerEU targets. The group proposes a hydrogen network of ~53,000 km by 2040, with further growth expected after 2040. The network, reflecting the vision of [31] European energy, hydrogen storage facilities, and port infrastructure operators,[2] covers 28 European countries and creates a diverse set of hydrogen import opportunities. The vision launched today follows the EHB reports published in July 2020 and April 2021, which sparked an uptick in interest across Europe. Since the initial launch one and a half years ago, the EHB’s 2040 vision network has expanded to 18 new countries and has grown by 110%.

In view of tighter national and European climate ambitions and following quotes from the EC’s REPowerEU communication to accelerate hydrogen, that can replace 25-50 bcm per year of imported Russian gas by 2030 and political developments have pushed EHB to accelerate its work programme, bringing the 2035 scenarios to 2030. The updated hydrogen infrastructure network maps presented today build on the EHB initiative’s prior body of work. The accelerated EHB vision shows that by 2030, five pan-European hydrogen supply and import corridors with almost 28,000 km of initial pipelines could emerge, connecting industrial clusters, ports, and hydrogen valleys to regions of abundant demand – and laying the foundation for future large-scale hydrogen supply. The EHB’s vision is an adequate vehicle through which the EC’s 2030 ambition to promote development of a 20.6 Mt renewable and low-carbon European hydrogen market could be realised.

The ~53,000 km envisaged backbone by 2040 requires an estimated total investment of €80-143 billion based on using ~60% of repurposed natural gas pipelines and ~40% new pipeline stretches, including subsea pipelines. This investment cost estimate, which is relatively limited in the context of overall investments needed in the European energy transition, includes subsea pipelines and interconnectors linking continental demand centres to offshore energy production hubs. Transporting hydrogen over 1,000 km along the proposed onshore backbone would on average cost €0.11-0.21 per kg of hydrogen, making the EHB the most cost-effective option for large-scale, long-distance hydrogen transport. In case hydrogen is transported exclusively via subsea pipelines, the cost would be €0.17-0.32 per kg of hydrogen per 1,000 km transported.

The hydrogen infrastructure maps for 2030 and 2040 published today reflect the vision of 31 European gas TSOs, based on their analysis of how infrastructure could evolve to meet decarbonisation targets. It is important to stress that the hydrogen transport routes and timelines in the maps are not set in stone. The final backbone design and timeline depend on market conditions for hydrogen and natural gas and the creation of a stable regulatory framework.

“With EHB, the participating infrastructure companies took a European perspective for upscaling hydrogen from the start. Going beyond just regional clusters and anticipating a Europe-wide hydrogen transportation infrastructure based on the existing gas infrastructure early on creates confidence for future market participants, access to various competitive supply sources and security of demand for project developers. The current geopolitical situation underlines how valuable Europe’s gas infrastructure is. It is a real asset in the transformation” says Daniel Muthmann, Chairman of the EHB initiative.

The EHB aims to accelerate Europe’s decarbonisation journey by defining the critical role of hydrogen infrastructure – based on existing and new pipelines – in enabling the development of a competitive, liquid, pan-European renewable and low-carbon hydrogen market. By 2040 this could include a majority 60% repurposed pipelines and 40% new.  The initiative seeks to foster market competition, security of supply, and cross-border collaboration between European countries and their neighbours.

The EHB initiative is looking forward to continuing to discuss its vision with stakeholders including policy makers, companies, and initiatives along the hydrogen value chain. An up-to-date and interactive version of the latest vision maps will be published alongside the EHB’s flagship website later in April.

[2] Note: since the announcement of the EHB initiative’s work programme in January 2022, 2 additional TSOs, Transgaz Romania and FluxSwiss (Switzerland) have joined the initiative. 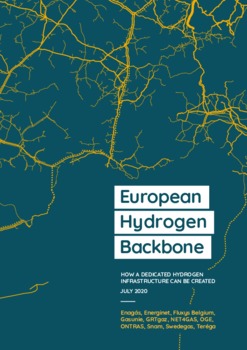