The faster way to find pipeline leaks. And it works like a CHARM®.

Detecting leaks in gas pipelines previously required walking along the pipeline with hand-held gas detection devices. This laborious process can be substituted by CHARM to a great extent. CHARM® is a laser-based system integrated into a helicopter that flies along the pipeline while the system scans the pipeline corridor and identifies even the tiniest gas leaks.

The charming name stands for “CH4 Airborne Remote Monitoring”, i.e. the remote detection of methane from the air. The system’s high degree of sensitivity means even very low methane concentrations can be pinpointed precisely from above. Even where pipeline topologies are very complex, the laser in the CHARM® system can detect the course of the pipeline consistently during the flight, with the result being highly reliable leak tightness inspections of gas pipelines.

And it’s not only for our own pipeline network that we use CHARM®: You too can make use of this inspection process for your pipelines Europe-wide. Right now, there is probably no more efficient or flexible method for above-ground leak tightness testing of natural gas pipeline networks.

In addition to leak tightness inspections, CHARM® has also turned out to be a suitable tool for methane emissions quantification at compressor stations, storage facilities and other natural gas infrastructure installations. The location of a gas release as well as its release rate can both be determined here. The whole area of a site is completely covered with laser spots, every single leak point is detected, natural gas plumes are visualized, and methane emission rates are calculated with the support of wind data that is measured simultaneously. Detailed information can be found in a research report by the European Gas Research Group.

Service features at a glance:

We also offer you photo tiles and associated geo-information. If required, we can provide an online GIS application that allows you to visualise, process and store the CHARM® results and compare them with previous reports.

The CHARM® measuring process is based on the absorption of infrared light by methane as a main component of natural gas. CHARM® generates two laser pulses of different wavelengths. The first pulse has the measurement wavelength (λon) and is absorbed by methane, while the second pulse follows with a reference wavelength (λoff) and is not absorbed.

Both light signals are sent out virtually at the same time as a double pulse from the helicopter to the ground, where the light is scattered in all directions. Part of the backscattered light is recaptured by the measurement system. The ratio of both backscatter intensities makes it possible to calculate the gas concentration in ppm·m (parts per million · meter).

In order to reliably capture the smallest traces of natural gas, it is nevertheless just as important to position the laser light pulses precisely along the pipeline route. The helicopter uses differential GPS to determine its precise position. In combination with an inertial measuring system (IMS) for determining the position in a three-dimensional space, the flight movement of the helicopter is calculated up to two seconds in advance. Comparison of the geo-referenced pipeline coordinates then makes it possible to target the pipeline route precisely. A rotating tracking head compensates for the influences of the helicopter movement and automatically directs the measuring beam precisely on the centreline of the pipeline.

CHARM® sends 1,000 double laser pulses per second to the ground. At a standard altitude of 120 m the measuring points on the ground have a diameter of around 1 m. Furthermore, a scanner scatters the laser pulses across a wide corridor of the pipeline route to a width of at least 7 m. The high number of laser pulses permits flight speeds of up to 90 kn (approx. 170 km/h) for quick and efficient tightness inspections.

The laser-based gas detection system CHARM® from OGE is the innovative solution for above-ground inspection of the tightness of natural gas transmission networks. Natural gas pipelines previously had to be inspected for leak tightness from the ground, but modern remote surveying technology offers new possibilities. We utilise this potential with CHARM®.

How does CHARM® work?
show moreclose

CHARM® sends a laser light in the infrared spectral range and analyses light back-scattered by the ground surface. Natural gas concentrations can be determined by tuning the laser wavelength to the spectral signature and specific absorption characteristics of methane.

Where can CHARM® be used?
show moreclose

CHARM® is used to check the leak tightness of natural gas pipelines in built-up and rural areas. The highly sensitive system and the automated scanning beam control system (autotracking) allow CHARM® to be used reliably even on complex pipeline topologies such as those in urban areas.

Furthermore, CHARM® can be used for leak inspection of complete sites including emissions quantification.

Which methane concentrations can be detected with CHARM®?
show moreclose

CHARM® can reliably detect methane clouds with a local concentration of about 1,000 ppm on the ground surface at travelling speeds of 30 to 90 knots from an altitude of 90 to 140 metres. The lower explosive limit of natural gas is 40 to 50 times that concentration.

Natural gas pipelines allow the safe, fast and economic transmission of large energy volumes. Stringent safety requirements for operation and the material used, as well as regular, extensive inspections and checks during operation with state-of-the-art technology ensure the high safety standards of these pipeline systems. CHARM® is a good example of this.

How often does Open Grid Europe check the pipelines from the air?
show moreclose

The entire network of the OGE is regularly checked completely with CHARM®. We also monitor our pipelines and the surrounding area in a two-weekly rhythm in a visual surveying flight totally independent of CHARM®.

Along with pipeline surveys, OGE’s compressor stations and other gas infrastructure sites are inspected using CHARM®, too. If there are any gas releases, these are identified and quantified and emissions shut off immediately.

At what altitude does the CHARM® helicopter fly over the pipelines?
show moreclose

At what speed does the CHARM® helicopter fly?
show moreclose

The travelling speed depends on the complexity of the pipeline network and varies between 50 and 170 km/h.

How many kilometres of pipeline does CHARM® inspect in a day?
show moreclose

The potential daily inspection length depends on the topology of the natural gas pipelines. A complex pipeline network with lots of bends and branches requires a reduced flying speed. If it’s a simple pipeline route, up to 500 km of pipeline can be inspected in a day.

How many staff work with CHARM®?
show moreclose

The CHARM® crew comprises the pilot and one CHARM® operator. There are currently four pilots and eight CHARM® operators who take it in turns on the helicopter. There are also a number of ground staff involved in flight preparation and scheduling, data processing and analysis, and evaluation of the results.

The laser does not pose a danger to either humans or animals. Due to the target’s distance, the light spot is actually scattered to the extent that its diameter on the ground is roughly one metre. Furthermore, there are no optical instruments at that frequency range of light that are able to focus the laser beam enough for it to be harmful. Additional automated safety mechanisms ensure that no laser light is emitted when the helicopter flies below an altitude of 60 m.

Can other gases be detected?
show moreclose

Yes, with CHARM® other hydrocarbons and CO2 can also be detected. However, this usually requires a modification of the technology and an adjustment of the control system. In addition, OGE is involved in the TransHyDE research project to develop a remote detection system for hydrogen.

Simply make an inquiry or a personal appointment right away. 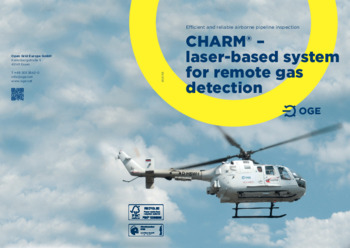 PreviewDownload
previous
next
to all brochures

Are your gas installations and above-ground piping leak-free?

Availability down to the last fibre

We help you utilise your dark fibre network

A helping hand for your projects too 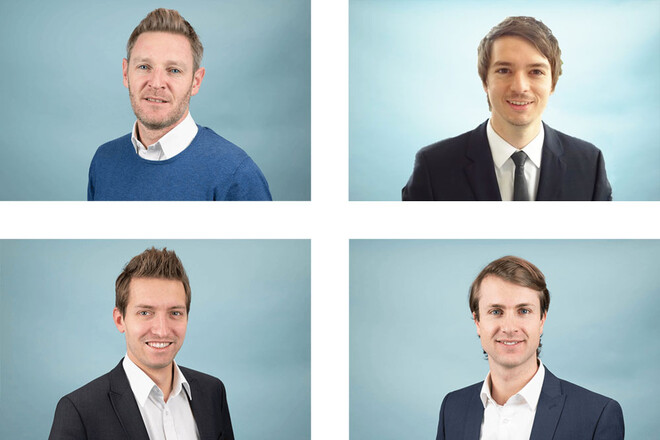 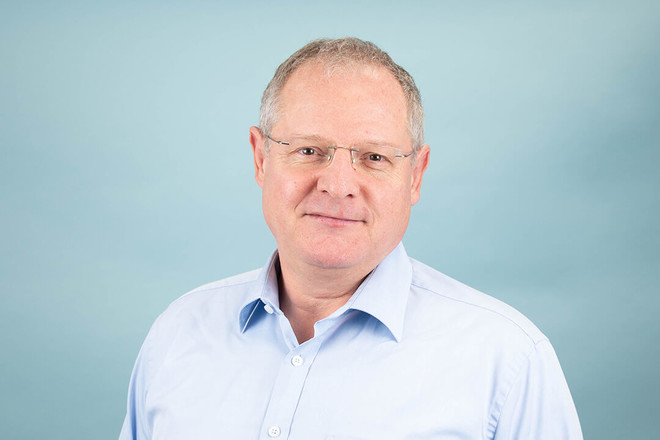 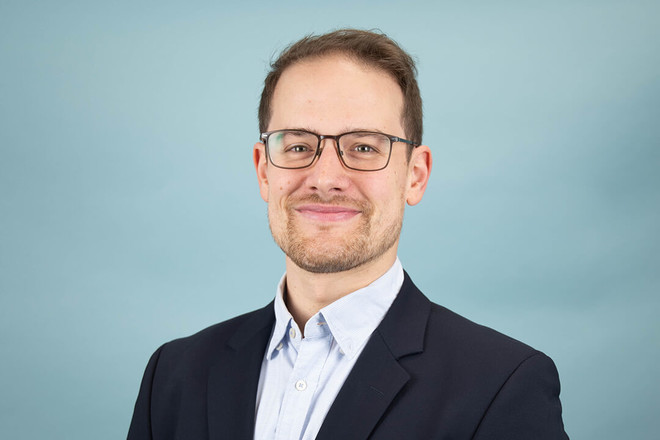