A hydrogen-powered route to the future.

Two hydrogen experts from OGE visited one of our latest projects: the Westküste 100 living lab in Schleswig-Holstein. The two travellers drove a Hyundai Nexo to get from Essen to Schleswig-Holstein, and we think there’s no better way to get to a pioneering hydrogen project than using a hydrogen-powered vehicle. We report on their journey — with details, of course, about the project too.

By fuel-cell vehicle to the living lab

On 4 December 2019 a Hyundai Nexo sits waiting for its passengers in the OGE car park in Essen. The vehicle is powered by a fuel cell using hydrogen-generated electricity and will be driven by Mahsa Siebold and Andreas Lehmann, who approach the vehicle with a mix of curiosity and excitement. The pair are OGE colleagues with responsibility for the hydrogen projects that the gas network operator is supporting and supervising. The Nexo has been lauded by the German automobile association ADAC as the “most user-friendly fuel-cell vehicle on the market”, and it is supposed to be able to travel 540 kilometres using just 1.2 kilos of hydrogen. The distance from Essen to Hemmingstedt in Schleswig-Holstein is around 450 kilometres, so it should be within the vehicle’s range.

Shortly before departure, project manager Martin Frings comes to take a look. Mahsa Siebold, who will at some point take over project management for the technical implementation of Westküste 100, and Andreas Lehmann, her colleague from the project communication team, don’t want to get in the car just yet. Together, the experts take a look under the bonnet. Where is the fuel cell? Where is the tank?

Inside the hydrogen-powered vehicle you’re immediately struck by the large display, which basically shows the vehicle technology in graphic format. This can confuse the driver, but it’s interesting to see how much hydrogen is converted directly and how the range is reduced when you really put your foot down.

We are looking forward to refuelling for the first time. The H2mobility app shows us where we can find hydrogen gas stations on the road, and we planned our route based on this. The range is actually adequate to get all the way there, but naturally we want to have a go at refuelling along the way.

At the gas station we first have to put the refuelling card into the pump and enter the PIN. We then connect the gas pump nozzle to the tank of the vehicle, and the gas is pumped at 700 bar, a very high level of pressure to ensure that the hydrogen can be pushed into the tank. Press the start button, then wait for the tank to fill, which takes about as long as for petrol or diesel vehicles. Then take the receipt — and off you go!

This map shows all existing and planned hydrogen filling stations across Germany in 2019, and more and more are being built. Go here for a live status update: https://h2.live/

The idea behind Westküste 100 came from the development office for the Heide region in cooperation with the Heide refinery. Here at OGE, we were already in regular contact with the development office, and right from the beginning they were very open and active in the way they approached the topic of hydrogen. Hence, we as a transmission grid operator were on board almost from the outset. 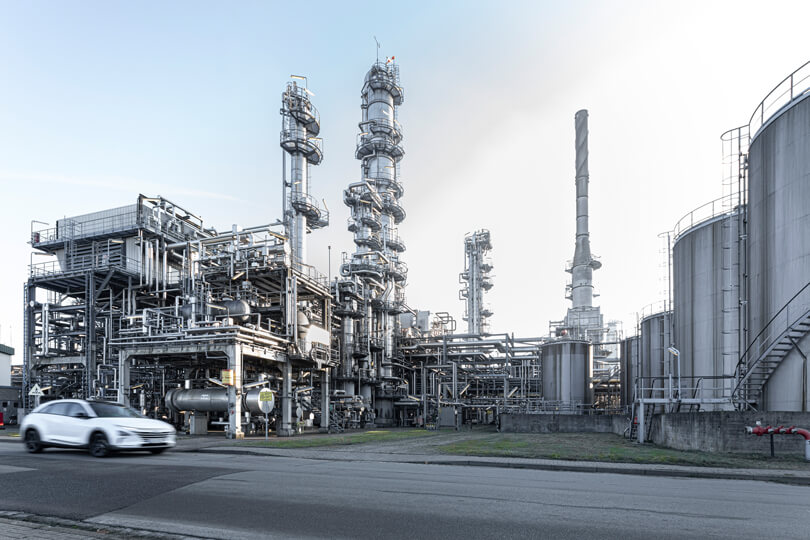 So we have a nice relaxing journey to the Heide refinery, where our vehicle is quite the attraction! Managing Director Jürgen Wollschläger even wants to get a few of the workers to jack up the car so he can have a look underneath it.

A more sustainable way to fly, build and heat in the future – that is our shared vision. If you take a look at the Heide refinery, then you’ll see that it’s our clear objective to operate a “green refinery” and thus play an active role in the energy transition.

Zero-emission mobility is not confined to the road but includes the air too. Glider pilots know what we’re talking about, and just what a pleasure it can be to float quietly above the flat land of western Schleswig-Holstein. Their true friend is the wind, which keeps them 400 metres up and is a part of everyday life on the ground. Indeed, one unmissable feature for both those on the ground and in the air is the vast number of wind turbines. These would produce far more power if they could, if they were allowed to.

Yet unfortunately the lack of sufficient capacity in the electricity grid and storage facilities often makes it impossible to utilise the amount of electricity they can produce, so turbines are repeatedly switched off.

“This happens here every other day, which is a huge financial loss: half a billion euros nationwide in 2018. This is money that the electricity customers have handed over without being able to utilise the paid output of the wind turbines,”

Jürgen Wollschläger, Managing Director of the Heide refinery, in an interview with the online portal bizz-energy.com in 2019

The Heide refinery is the northernmost petrol production site in Germany. Here in Hemmingstedt more than four million tons of crude oil are processed every year and thus converted into petrol, diesel, kerosene, heating oil and many other petrochemical products.

From the refinery to the village of Heide, it’s just a short hop for a pilot, and the open space in the centre is clearly visible. This is the biggest undeveloped market square in Germany, the size of around six football fields. It was a site of trade and politics great and small as far back as more than 500 years ago, and as a huge space it was the region’s hub, where networked producers, merchants and buyers would gather.

Back then, fossil fuels were already being used for trade and production, but to nothing like the extent they are today. Against the background of climate change, it’s now high time for decarbonisation of entire branches of industry, and the region surrounding the town of Heide aims to set a particularly good example.

From the cockpit of a glider it’s still impossible to see, but over the next few years a 30-megawatt electrolyser will be installed on the ground close to the Heide refinery. This is a key element of the “Westküste 100” living lab.

And the winner is: the climate

The “Living Labs for the Energy Transition” initiative is a competition for funding launched by the German Ministry of Economic Affairs. The twenty selected projects get a total of 100 million euros annually from the federal budget for a period of five years. In the living labs, the project participants research innovative energy technologies under real-life conditions and scale these up to industrial dimensions, with a key focus being hydrogen as a core element of sector coupling.

One of the winners is the “Westküste 100” project, launched by a consortium of EDF Deutschland, Holcim Deutschland, OGE, Ørsted, thyssenkrupp Industrial Solutions and the Heide public utilities and refinery. The plan is being supported by the development agency for the Heide region and the “Fachhochschule Westküste”, the West Coast University of Applied Sciences. What’s so special and innovative about this living lab project is the dovetailing of various material cycles within a pre-existing regional infrastructure: wind turbines, refinery, cement production, gas pipelines and municipal utility.

First, an electrolyser plant with output of 30 megawatts will provide insights into the operation, maintenance, control and grid support capabilities of these sorts of systems, which will be important when it comes to constructing electrolysers on a considerably larger scale later on. The planned scale is 700 megawatts, for which the power will be generated by an offshore wind farm.

The renewable energy generated this way will be used in the project to produce green hydrogen through electrolysis at the Heide refinery. An interconnected hydrogen network is planned for this, which will ultimately link up the refinery, the municipal utility, a cavern storage system for hydrogen and the existing natural gas network.

One important component of the future hydrogen network is the transmission pipeline: OGE already has transmission line close to the refinery. For Westküste 100, OGE will build a connecting pipeline of around six kilometres – from the refinery to the Heide municipal utility. As an infrastructure provider, the transmission grid operator will make a crucial contribution to knowledge transfer within the living lab.

Westküste 100 is set to show by way of example how consistent sector coupling works. This also includes oxygen from the electrolysis being fed into the combustion process of the local cement factory. This way, it will be able to reduce its emissions of nitrogen oxide (NOX) considerably. The carbon dioxide (CO2) produced by the cement factory should then, in turn, be used together with the green hydrogen in the refinery for the production of synthetic hydrocarbons.

What can you make with these? Aviation fuel and chemical substances like methanol! And the green “chain reaction” doesn’t stop there: The process heat from the refinery is set to be recovered and fed into an existing and further developed heating network for use at a nearby industrial estate.

The application for funding is currently with the Ministry of Economic Affairs awaiting approval. The project participants expect to get confirmation of funding in summer 2020, then implementation will follow.

We are committed to a sustainable energy supply - also online. Therefore the operation of this site is CO2 neutral.